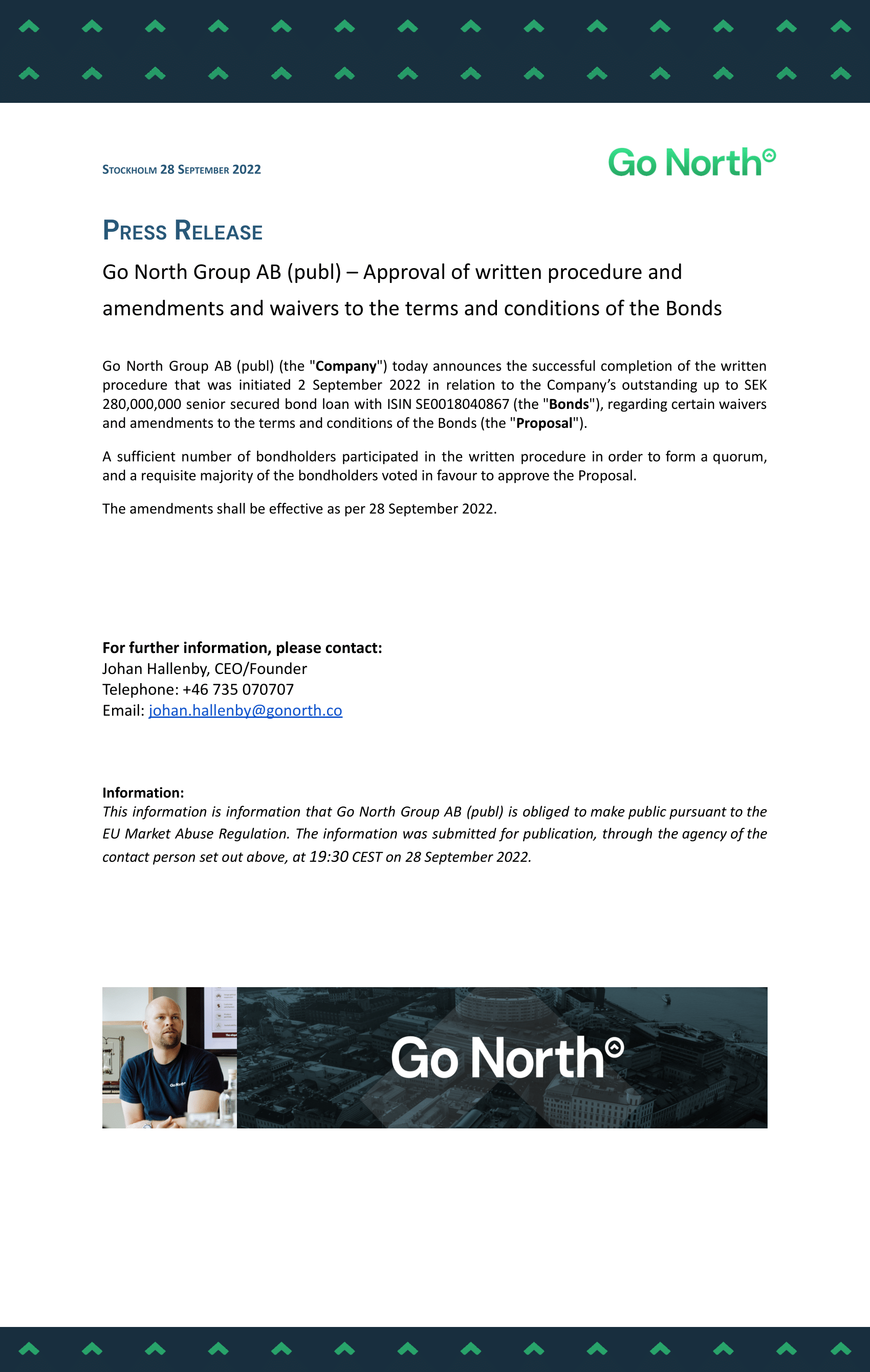 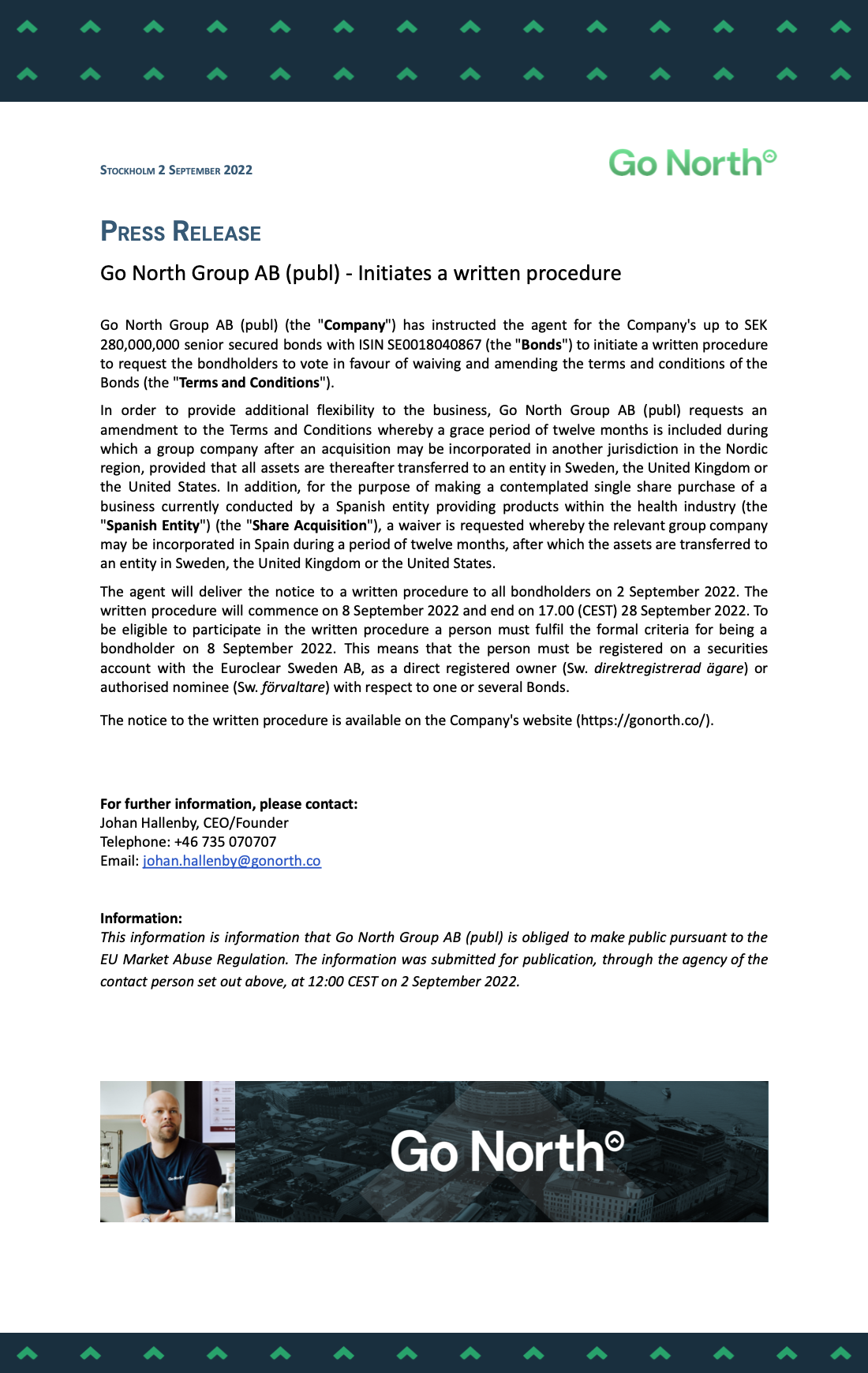 “I do not exaggerate when I say that we will soon be Europe’s fastest growing startup ”.

It’s understandable why Johan Hallenby sounds excited. He’s backed by several well respected tech-entrepreneurs, and he’s raising capital, buying brands, and recruiting his team all at once. Go North, the Gothenburg based, entrepreneur-led FBA aggregator plans to grow at record speed, and shop e-commerce companies at a furious pace.

“I have personally launched several Amazon ventures”, says Hallenby, and explains that his team has a clear roadmap for targets and acquisitions. “Within three years, we will have a turnover of at least SEK 1 billion with good profitability,” he states.

“We have raised $ 1 million in a first round in the autumn and the plan is to secure at least another $ 20 million in capital during the first quarter of this year. The goal is to make an acquisition every week during 2022. There is an enormous potential for consolidation and the competition among other aggregators with our positioning is almost non-existent,” says Johan Hallenby and states: “We will build the next large Nordic e-commerce group”.

Newly launched Go North has set its sights on acquiring a new brand per week – and accelerate its business on Amazon. Now they’ve closed their seed round with SEK 77.5 million in funding from eEquity and Lena Apler (Collector Bank), amongst others.

He is the CEO and founder of the Gothenburg-based company Go North, which according to his own statement is Sweden’s first FBA aggregator. Despite the fact that the company only started operations as late as December 2021, it has already managed to gather 11 brands in its portfolio—which is in line with the previously set goal of acquiring a new company each week. The portfolio includes companies from Israel, Great Britain and Estonia, in categories such as Sports & Outdoor, DIY, and Kitchen Equipment.

“My ambition is to build a company with endless growth-potential. There should be no restrictions. Amazon is the right platform for that”, says Johan Hallenby.

With the support of their new funding, Go North is looking for both Swedish and foreign companies to buy. And as they do, they prepare for further cash injections. The goal is to raise several hundred million SEK in debt financing before the summer.

If the acquisition rate stays the same, the revenue for their first financial year will land north of SEK 100 million. Within three years’ time, the goal is to have increased tenfold and for the company to have achieved good profitability.

“Our ambition is to become Europe’s next ‘unicorn”,  says Johan Hallenby.

In January, E-handel wrote about Go North – a company founded, as recently as December last year in Gothenburg, by the entrepreneur Johan Hallenby.

He has started a so-called Amazon aggregator. It’s a company that buys the assets of profitable e-commerce brands on Amazon, where Amazon handles fulfillment. Go North does not buy the entire company, but for example their products in stock and Amazon presence.

The aggregator aims to make the companies they buy even more profitable on the giant, American platform. When Go North is looking for companies, however, they are looking for brands with a couple of years of positive history and solid growth.

“Many entrepreneurs have done a really good job with their brands, but realized that they may not get to the next level without more funding and access to a world-class operational e-commerce team. And this is where we come into the picture”, Johan Hallenby told Ehandel in mid-January this year.

NA-KD profile included in the round.

Go North has now announced that they’ve raised 77.5 million in venture capital. The round was led by the venture capital firm eEquity, and other investors include Collector founder Lena Apler, NA-KD’s chairman of the board and profile Magnus Emilson – and e-commerce entrepreneur Alexander Hars, according to Di Digital.

“The market is insanely hot right now and we have over 200,000 potential brands that meet our criterias”, says Johan Hallenby to Di Digital.

So far, he has amassed eleven brands in his portfolio, which is in line with the goal of buying a new brand every week. So far, these include Amazon retailers from Israel, Great Britain and Estonia, selling everything from sports and outdoor items, to DIY brands and kitchen equipment, according to Di Digital.

The goal for Go North is to reach a 100 million in revenue by the end of the year. In three years’ time, the aim is for it to have increased tenfold – and for the company to have reached profitability, according to Johan Hallenby.

Amazon’s incredible success is partly driven by third-party sellers, and the idea of aggregating these smaller brands under an operational umbrella to increase profitability has shown great success. Today, Go North Group AB (publ), a leading e-commerce aggregator operated by Amazon FBA entrepreneurs, has successfully issued senior secured floating rate bonds in an amount of SEK 225,000,000 under a framework of up to SEK 280,000,000 with ISIN SE0018040867. The bonds were issued at a price of 100 per cent. of the nominal amount and are due in July 2025. The transaction was well received by the market, as evidenced by a strong demand despite severe market conditions. Altogether over 30 investors participated in the issue and attracted significant demand from the US and Continental Europe. The funding comes shortly after the previously announced SEK 77,500,000 equity round in April 2022 lead by eEquity.

Go North Group AB (publ) have in just a few months built a portfolio of 15 brands, with impressive post-acquisition growth (YoY), built a team of +20 people and plan to acquire 12 new identified brands to continue to grow both revenues and profits for the group. The proceeds from the bond issue will be used to, inter alia, finance general corporate purposes of the Group, including investments and acquisitions.

Pareto Securities AB acted as sole arranger and bookrunner in connection with the bond issue.

“Completion of the bond debt raise means we will strengthen our position as the leading FBA aggregator in Northern Europe, acquiring and scaling fast-growing brands on the Amazon Marketplace globally. Since the first acquisition, six months ago we are now 15 brands in the group with great organic post-acquisition growth, have a huge M&A pipeline and we have built a world class team. The next big step will be to raise our next equity round in Q3-22” says Johan Hallenby, CEO/Founder Go North.

“With this financing solution in place, Go North achieves an efficient and flexible balance sheet and becomes geared to expand its business going forward. Obtaining bond financing during such poor market conditions on short time reflects the great trust in Go North and its owners. This empowers our management team to continue developing and positioning Go North as a leading FBA aggregator “ says Magnus Wiberg, Managing Partner at eEquity.